The Empire Minecraft Outpost Tour series is written by me, JDHallows, a staff member on Empire Minecraft. I travel out to different outposts throughout the frontier on EMC. While there, I take notes and pictures of these players outposts and create an informative tour of each one. This tour is based on the outpost kingdom of Hyrule, as founded and built by lauwenmark. 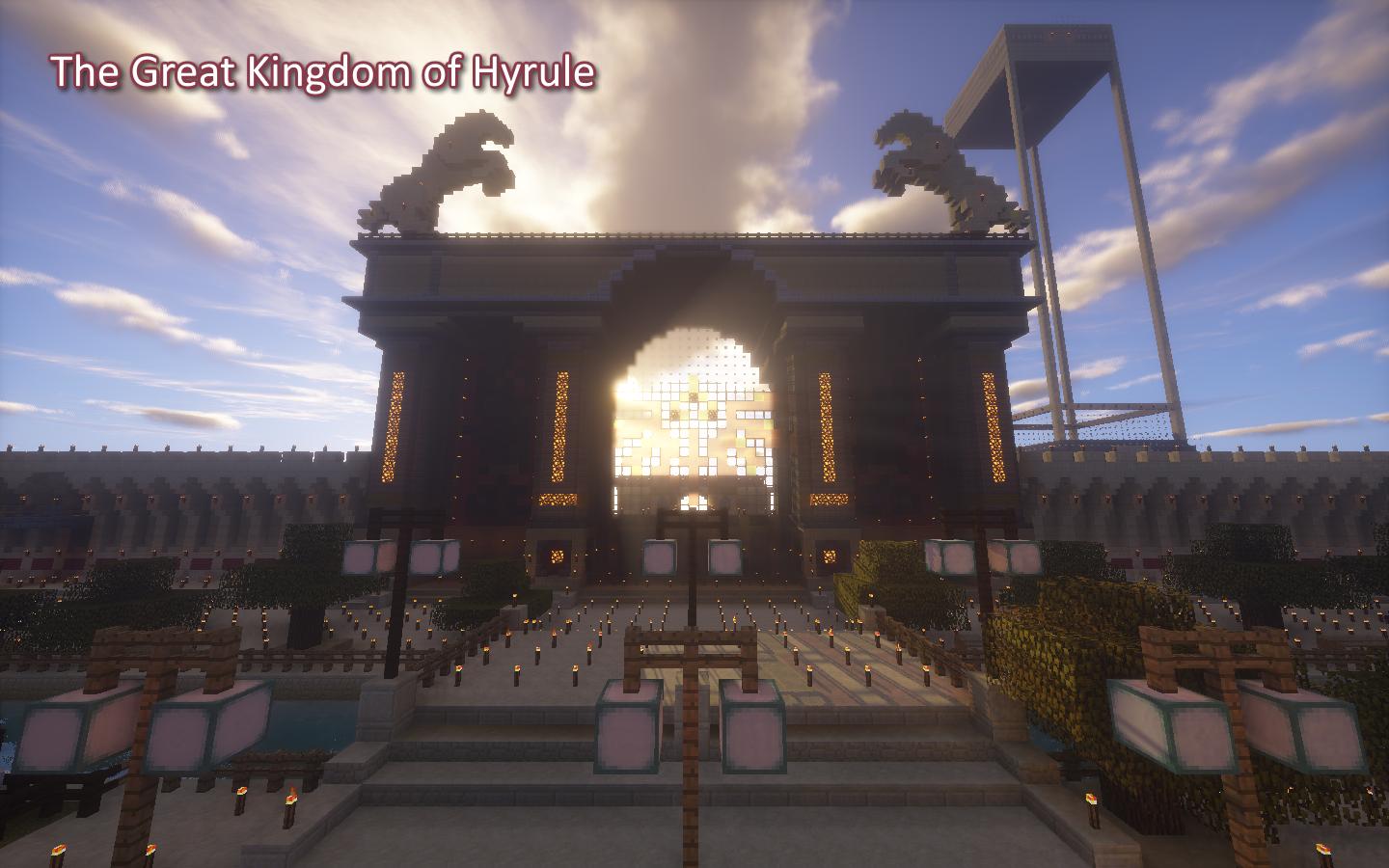 The image above shows the work and effort lauwenmark has put into his outpost. Showing one of the grandest entrances into an outpost that I have ever seen, the main gate is true to the outpost’s name of Hyrule. With the name based on the iconic kingdom in the Legend of Zelda game franchise, the outpost lives up to the expectations.

Traveling to the Kingdom of Hyrule

When I met up with lauwenmark in preparation to head out to his outpost, he showed me his unique rail system to Hyrule. The Hyrulian Lines, as lauwenmark called it, connects a series of outposts and builds throughout the local area, with each “station” on the rail line equipped with the setup depicted in the picture below.

This creative system allows the user to point the arrow in the item frame to the outpost or build they want to go to. Simply pushing the button on the wall next to the signs sets the location, then pushing the other button above the dispenser starts the minecart along the rail. 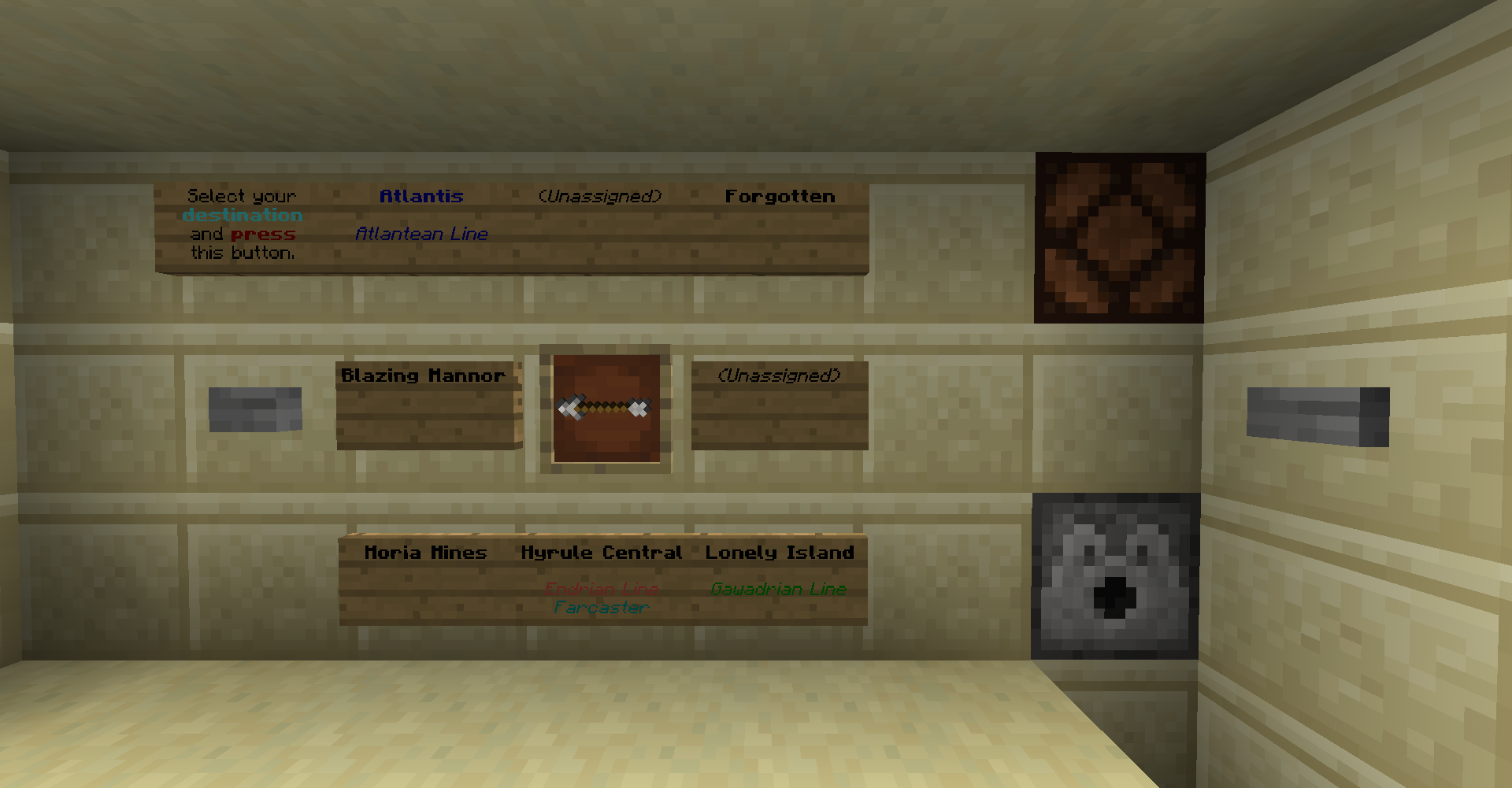 In addition to the Hyrulian Line, lauwenmark has made travel inside of Hyrule quick and efficient as well. Inside Hyrule, he has created a network of portals called the Farcaster Web. By using the 8 to 1 block ratio of the overworld to the nether, outpost members are able to travel hundreds of blocks in the overworld in a few seconds by walking from one portal to the next. The system is very efficient and is a great way to travel within the Kingdom of Hyrule without needing Epona. 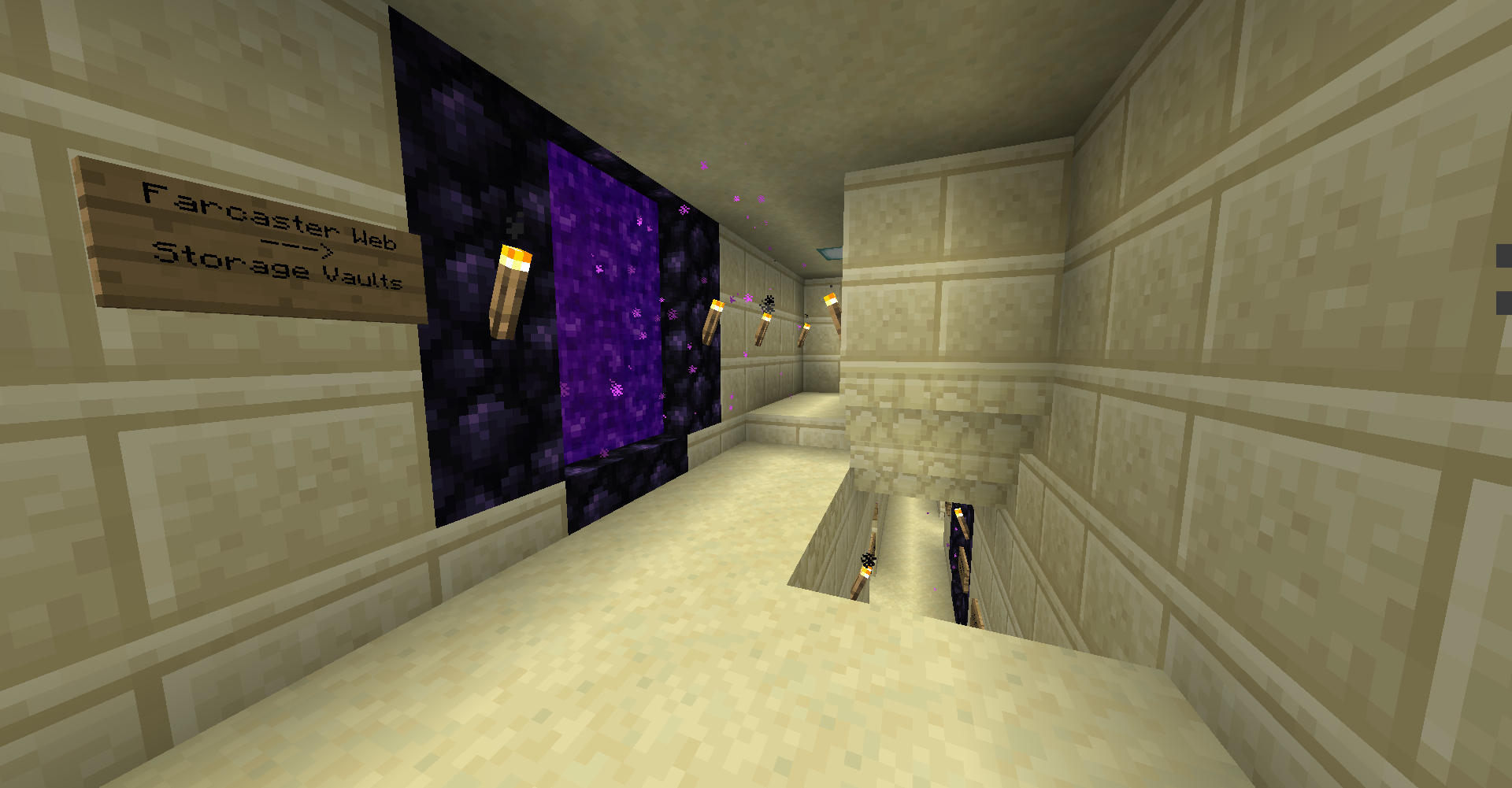 The first area of the outpost that lauwenmark took me to was his massive storage system. If you look at the image below, you can see rows of chests, each one holding a different item. This storage system is also built around a slime chunk, with the glass box in the middle being a slime farm. Once they spawn in, they fall off the edge and are killed by cacti sitting below. Hoppers collect the slime balls and send them to the storage system. 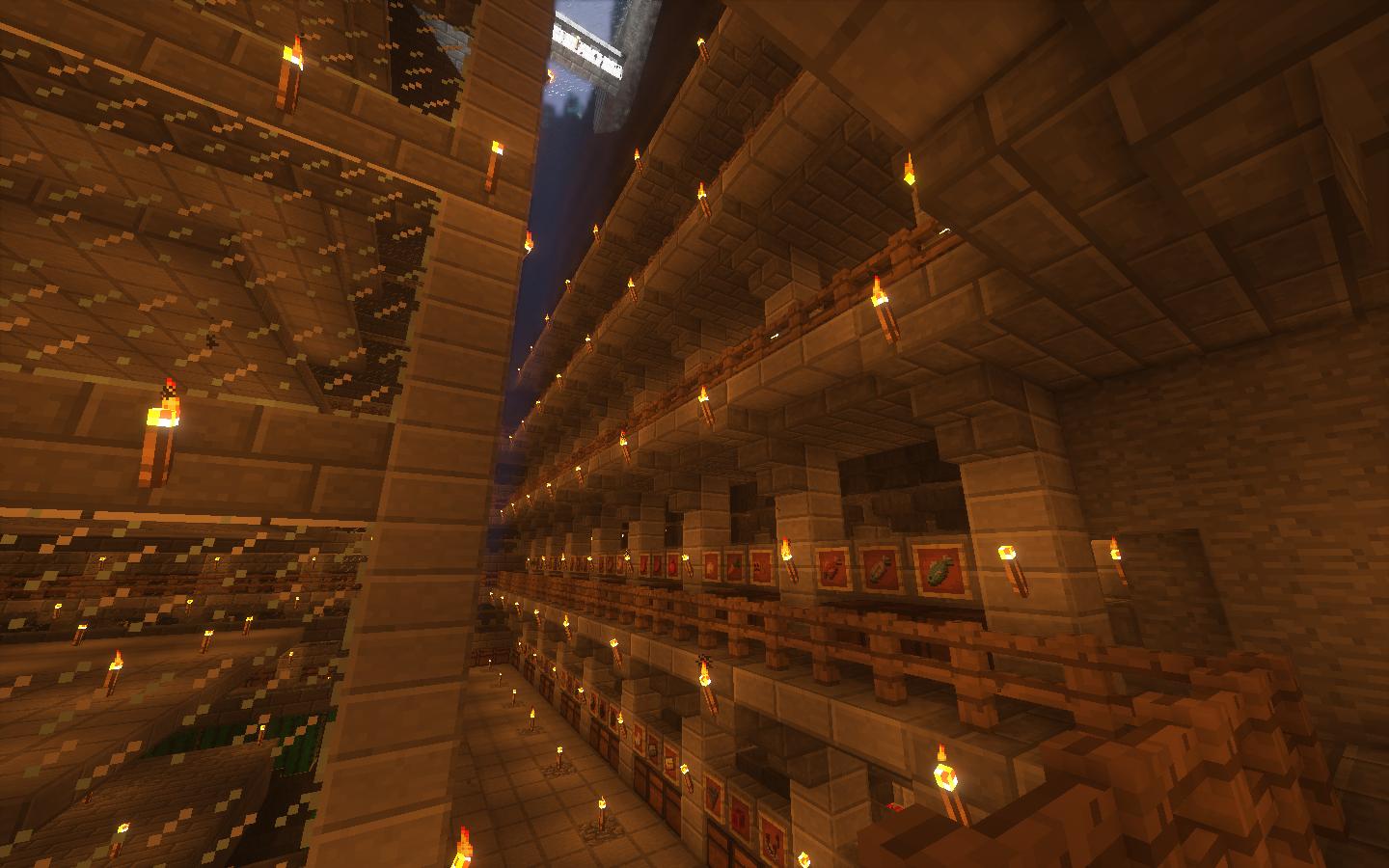 As lauwenmark lead me up the next few levels of his storage system, I realized that the sorter and slime farm are located below ground. Above the surface, lauwenmark has built a massive tower with some awesome pixel art depicting Link from the Legend of Zelda series. However, what is behind the pixel art is even better. This tower holds multiple floors of different automatic farms, including wheat, nether wart, sugar cane, a generic mob farm, and even a gold farm. All of the output from these farms feed into hoppers that lead directly into the sorter built below the tower. Thus, his storage is constantly refilling. It’s truly a great and efficient system. 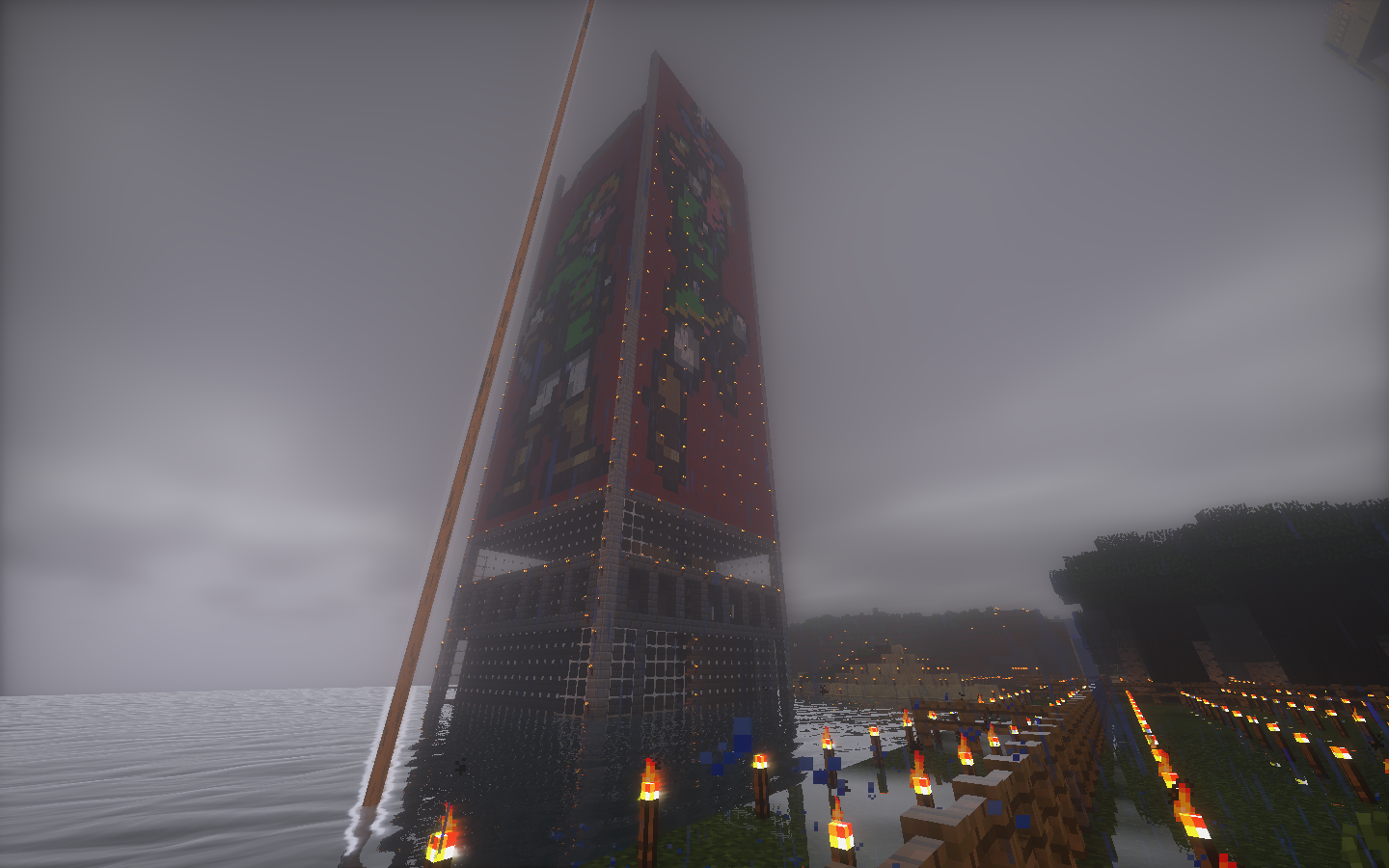 While only home to one ship at the moment, lauwenmark had the amazing idea to create a fleet. Currently, the ship is land-locked, with plans to open the bay to the nearby sea and build more ships. You can look forward to a true fleet sailing in the Kingdom of Hyrule’s waters in the future! While a work in progress, the idea and plans for the build sound exciting! 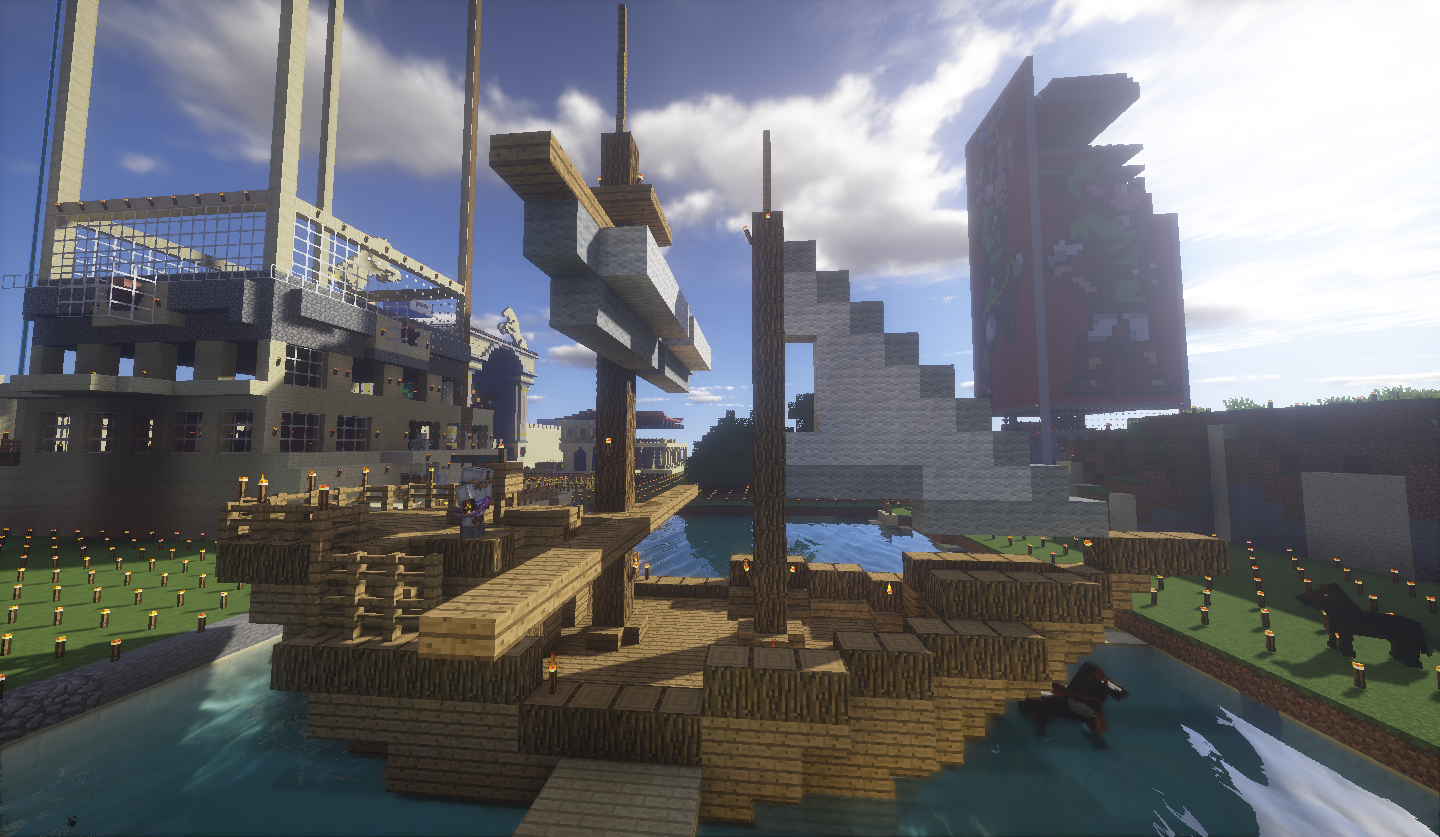 Every outpost needs a place for the owner to rest their head, and Hyrule is no exception. This Romanesque house is lauwenmark’s home in Hyrule, and it is quite extraordinary! While most homes have kitchens, living rooms, and other normal house-like things, lauwenmark’s home has… 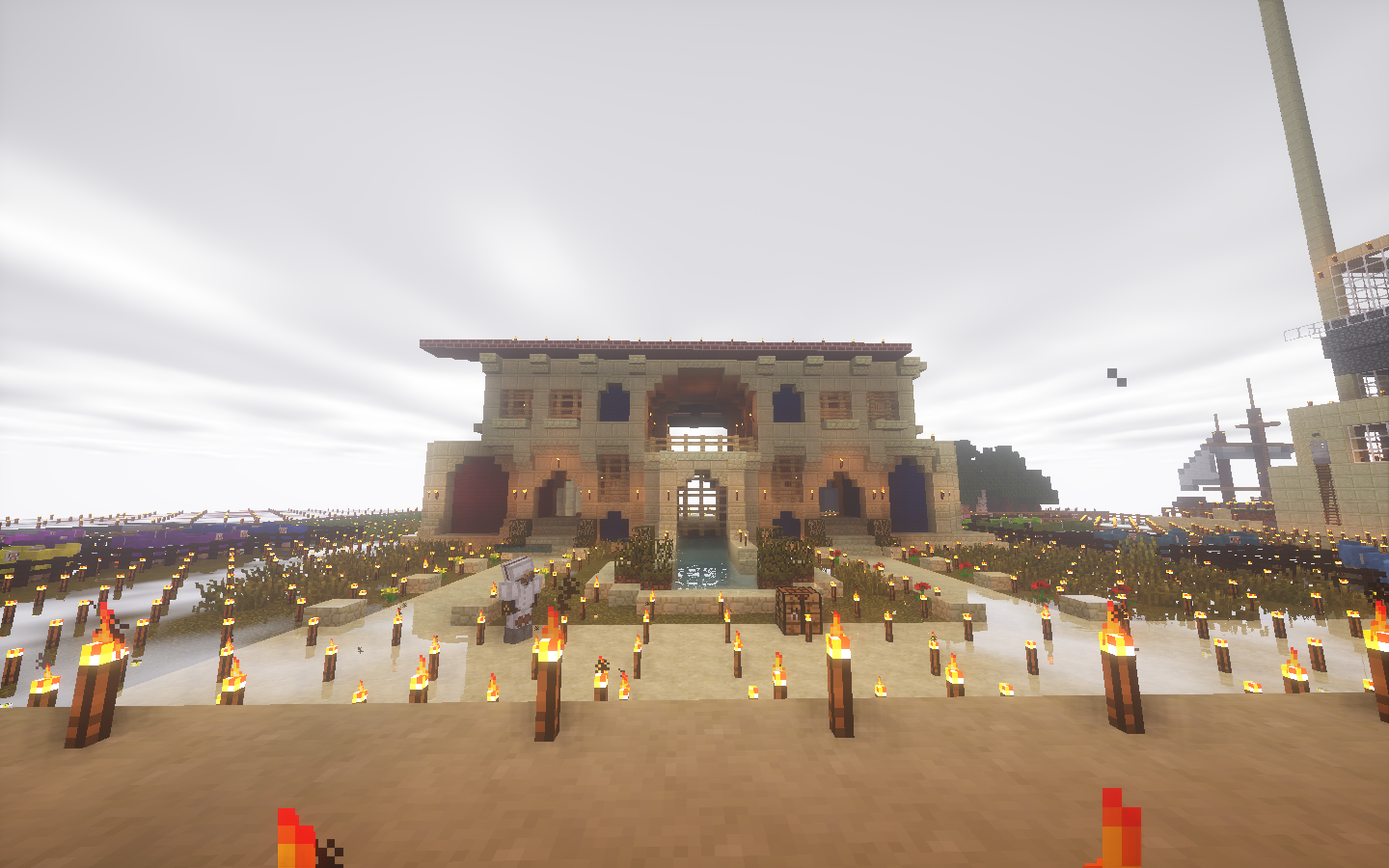 …a swimming pool! This pool is in the perfect location too, with a wide open view of many sights of the outpost. You can actually see the farm tower in this picture, for example. 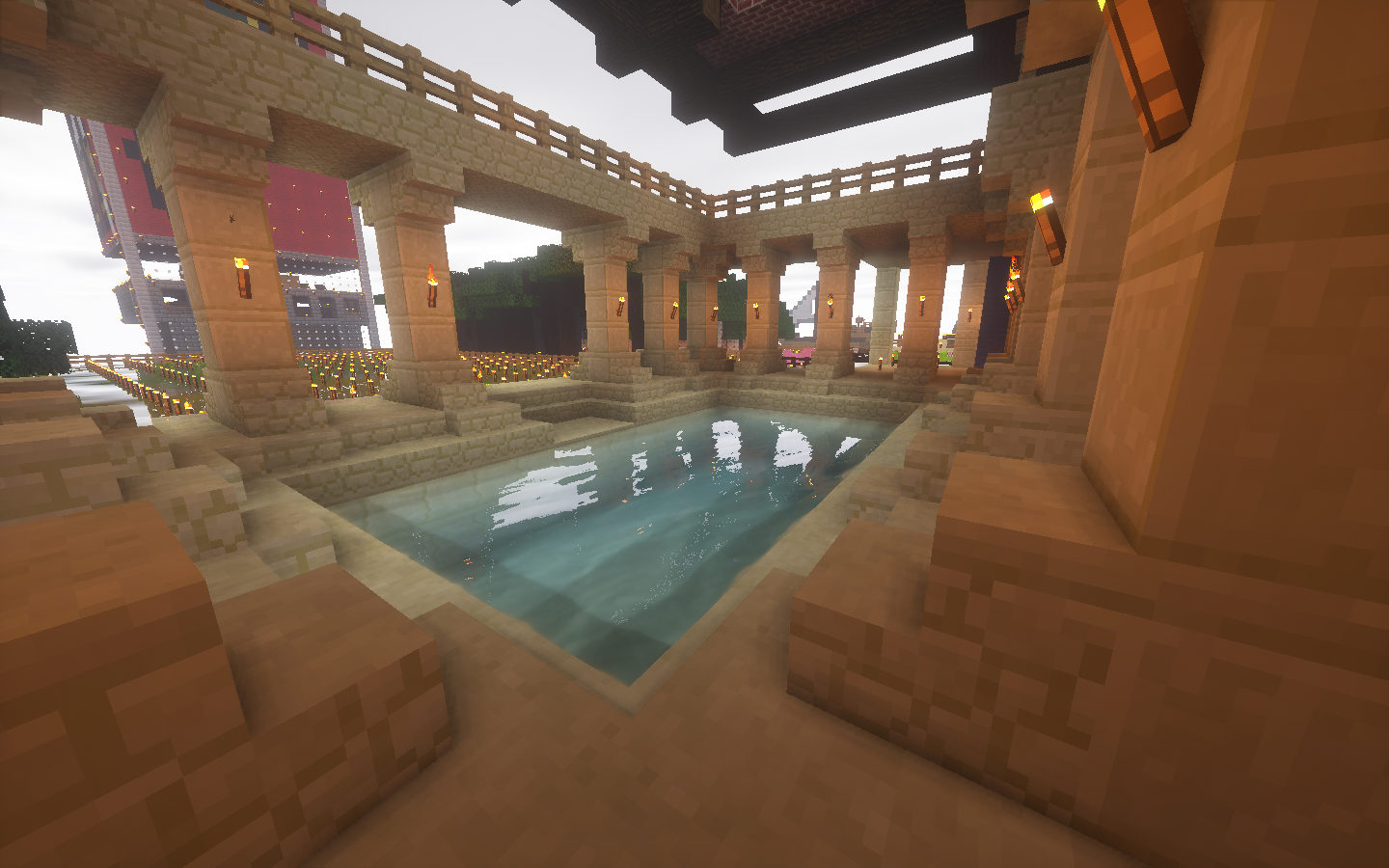 Outside the main gate into Hyrule, pictured in the first image on this blog post, exists the Temple of the Holy Sand. A very special block of sand is the sole reason for the temple. 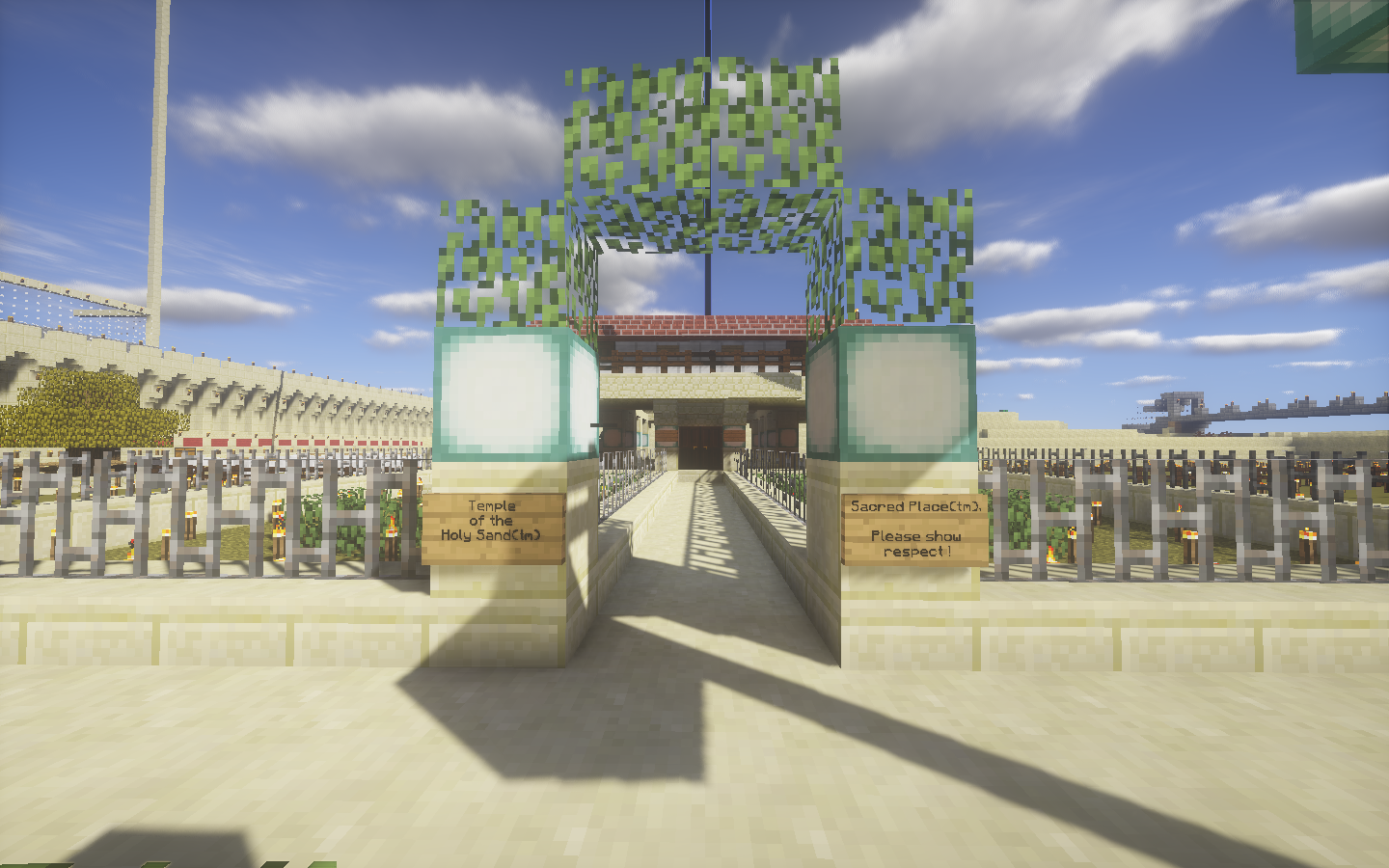 Labeled “One Sand to Rule Them All,” this block of sand is very important to the Kingdom of Hyrule. In fact, the sand block was renamed by me to “JDHallow’s Promo Sand” and sent to lauwenmark as a gift. “JDHallows Promo Sand” is a joke item that I renamed soon after I was promoted to staff. I sent a few of them out to friends and other people on EMC at the time. Lauwenmark keeps it on display for all of his visitors to see. 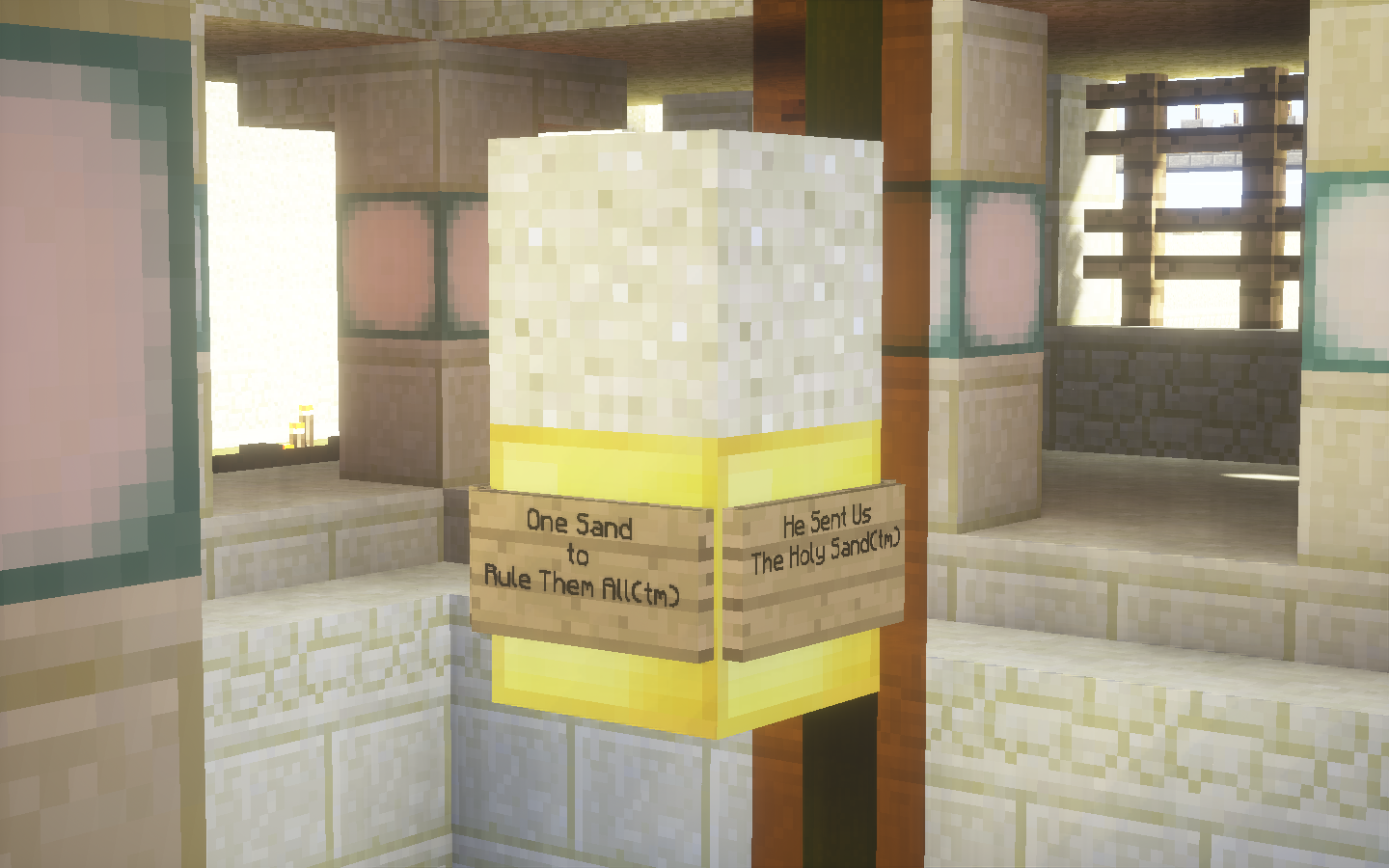 Just when I thought the tour was over, lauwenmark had one last build he wanted to show me. Although it is currently a work in progress, lauwenmark’s half finished statue of Link is already a breathtaking sight. I was in awe at how realistic it looks and I look forward to seeing it completed. 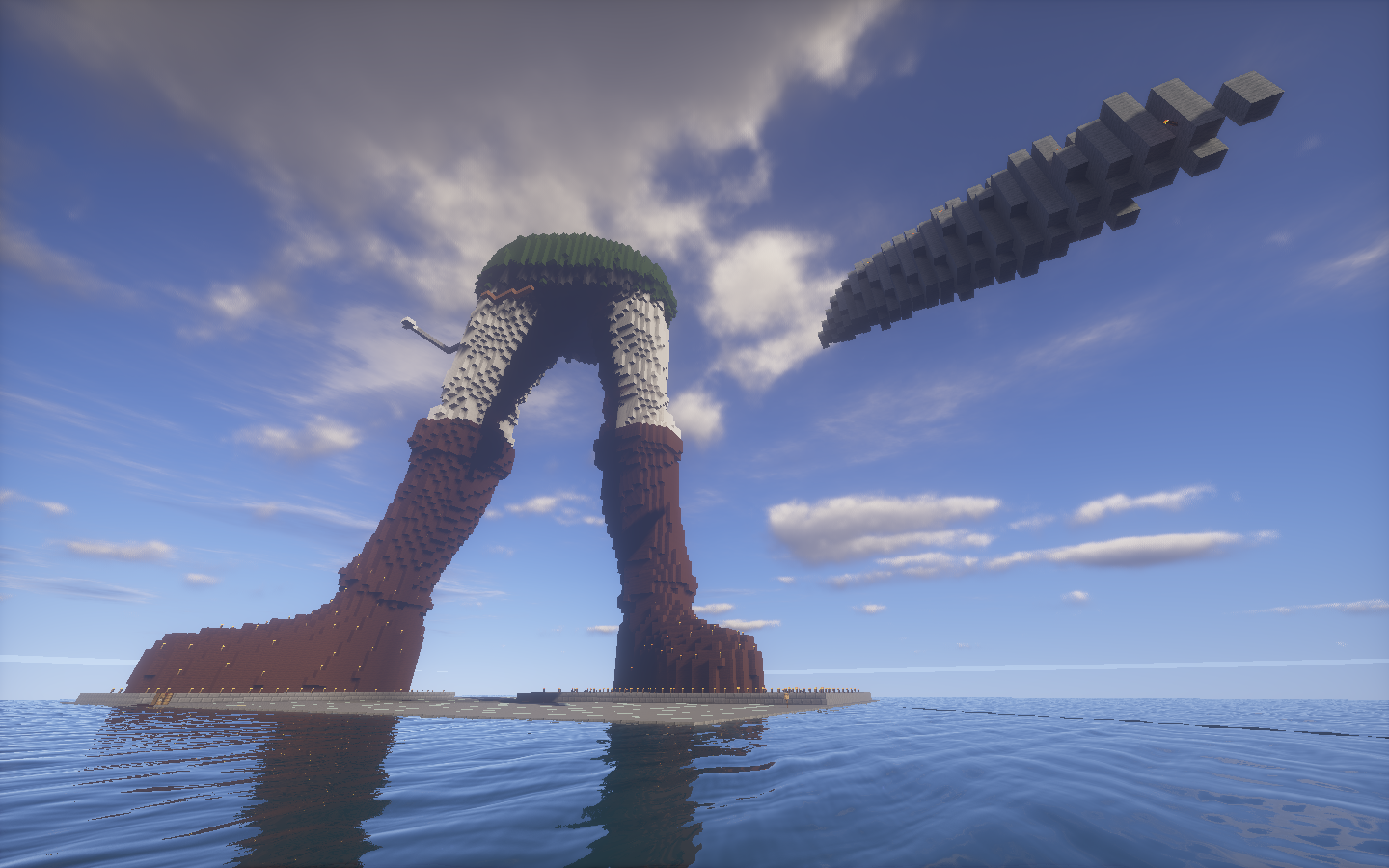 With a statue to finish, a fleet to build, and a Kingdom to grow, lauwenmark is a very ambitious and busy outpost owner. However, I am looking forward to my return to Hyrule and seeing the end result. Perhaps when I do, I will write an updated version of this blog post so we can all see how it has changed throughout the ages. Until then, I look forward to seeing how other outpost owners can amaze me with their creativity and ingenuity!

Would you like to have a tour of your outpost posted on the blog? Click here to learn more about this free service provided to Empire Minecraft members!

Would you like to see another outpost tour? Click here to view the previous outpost tour on the blog!