At Minecon 2016, it all started with punching a tree…

I’ve been a part of the Minecraft community for well over 4 years now. I’m lucky to say that I have attended two separate Minecons, both 2013 and 2016. No other event could possibly compare for a Minecraft devotee. From panels to meet and greets to exhibits that immerse you into the pixelated world, there is plenty to do. For those that have never been, here’s a little recap of Minecon 2016, as told by the Minecon Sheep.

Minecon 2016 was held in Anaheim, CA on September 24 – 25. Registration started the night before, and we all received our goodie bags. After a thorough analysis of their contents, we were ready for the fun to start right then and there. We definitely didn’t get that much sleep the first night. Who could possibly sleep with that much excitement? We woke up early, got dressed, grabbed some tasty wheat (in the form of pancakes), and headed to the convention center to queue up for the opening ceremony. Walking to the end of the line, it was clear that this was going to be the biggest Minecon yet. We all funneled into the Main Stage arena and watched with eager anticipation. The countdown started, and the audience went crazy!

You can still catch most of the opening ceremony online, thanks to a pretty awesome livestreaming set-up that Mojang had. Search YouTube and you can watch it all from start to finish. So let’s fast forward a bit…

Horses, and Guardians, and Cakes, Oh My!

The best part of the Minecon 2016 exhibition floor, in this sheep’s opinion, was the immersive areas. Greg Aronowitz and the BarnyardFX crew did a fantastic job setting up different biomes and buildings for the attendees to explore and interact with. My favorite, and a hit among the humans in attendance, was the horse. It was a perfect picture moment! Other exhibits included a giant Guardian, a family of Polar Bears, a Snow Golem, a creepy cave, and a player-built house with all the trimmings. The cake inside on the table looked good enough to eat, but tasted a bit more like wood and paint than frosting unfortunately. Another great area was the tree punching exhibit because, as any good Minecrafter knows, it all starts with a punch. For this sheep, it was more of a face smash, but it did the job and was great fun.

The Quest for a Minecon 2016 Exclusive Item

The one aspect of Minecon 2016 that needed quite a bit of help was the organization for the J!NX merchandise booth. Granted, they did an okay job, but they should have expected the demand and adjusted for it. If you put ”‘limited edition” and “Exclusive Minecon 2016 Item” on something, all the animals in the barn will go for it, this one included. I’m not too proud to say that my determination to have a little purple plush sheep for my own led to me standing in line for almost 4 hours. If you go to a Minecon event in the future, try not to follow in my hoof prints. Spend that time out enjoying the event more. To the mom that was right in front of us in line because their kids wanted a shirt and plush sheep as well; I hope your kids know how lucky they are.

Note: J!NX has recently emailed all Minecon attendees with codes in order to access a special online store. Here you can buy the exclusive items, since they sold out so quickly. If you avoided the long line at the event, you’ve got a second chance to snag your own purple plush sheep. I only wish they had told us this plan beforehand so that I could have spent more time at the panels.

They Said What Now?

The panels were a unique mixture of YouTubers for the most part. These players make videos for YouTube while playing Minecraft. Some tell stories and make jokes while others play games and make tutorials about how to build structures in the game. They all gain a following of players that love to watch their videos. Minecon 2016 was full of YouTube Minecraft stars. Many of them took time out of their day enjoying the festivities to sign autographs and take pictures with their adoring fans.

The most famous Minecraft YouTubers of all, stampylongnose and iballisticsquid, had a public one-on-one Minecraft challenge, after which Stampy graciously took a cake to the face for his loss. If you’re a fan of any YouTube Minecraft stars, Minecon 2016 was the place to meet and greet them.

Minecon 2016 attendees and viewers of the live stream online were privy to the very first sneak peek of Minecraft version 1.11. Jeb and the Mojang development team worked their way through each of the changes and what brought each of them about. From shulker boxes to llamas, the audience was eager to play with each announcement, and with good reason. Now that we’ve had time to experiment with the features, we’ll be writing up a full review of the new release. Stay tuned.

I almost forgot the swag! In addition to the awesome Minecon 2016 bag we received at registration and our snazzy new capes, there were exhibitors on site to talk about their products and hand out some free goodies. Some of the booths I visited were Omni with their VR headsets (which were not made with a sheep head in mind, fyi), ThinkGeek with some Minecraft merchandise, and of course Sponge, a community-driven open source Minecraft modding platform that Empire Minecraft’s own Aikar helps out with. There were many other awesome booths in place, but it would take a lot of room to list them all out so I’ll leave it at that.

Was It Worth It?

Overall, Minecon 2016 was an experience. Like most conventions, there is a lot of waiting in lines for autographs or items and plenty of sitting through long panels to listen to your favorite people and have the chance to ask them a question. There were various contests and chances to win prizes too. As mentioned before, I’ve been to two separate Minecon events so far, and I’ve enjoyed them both. The most important thing to remember is that it’s as much about the experience as it is about the content.

To have that many people at Minecon 2016, of all ages and backgrounds, in one place to enjoy the game of Minecraft and be excited about the event makes it completely worth it. Hanging out with and forming stronger relationships with those players that we’ve met through Minecraft was the cherry on the top. By the end of the weekend, this sheep was exhausted and ready to hit the hay (or a comfy pixel bed).

They’ll likely have Minecon 2017 in a different country, if the past event pattern is any indication, but when they bring it back to the United States, you can bet that I’ll be buying tickets. I hope to see you there!

The Mob Arena can be very fun and rewarding, and takes a while to master. However, knowing how to prepare and getting some quick tips will increase your chances of winning. While having some degree of skill fighting mobs helps, it’s not that important to be a skilled fighter. Fighting mobs is very often the last thing you want to do. This post will center around tips for preparing for Mob Arena, and give some basic tricks for surviving. All of the information is given with version 1.8 in mind.

Welcome to the chaotic death trap known as Mob Arena! 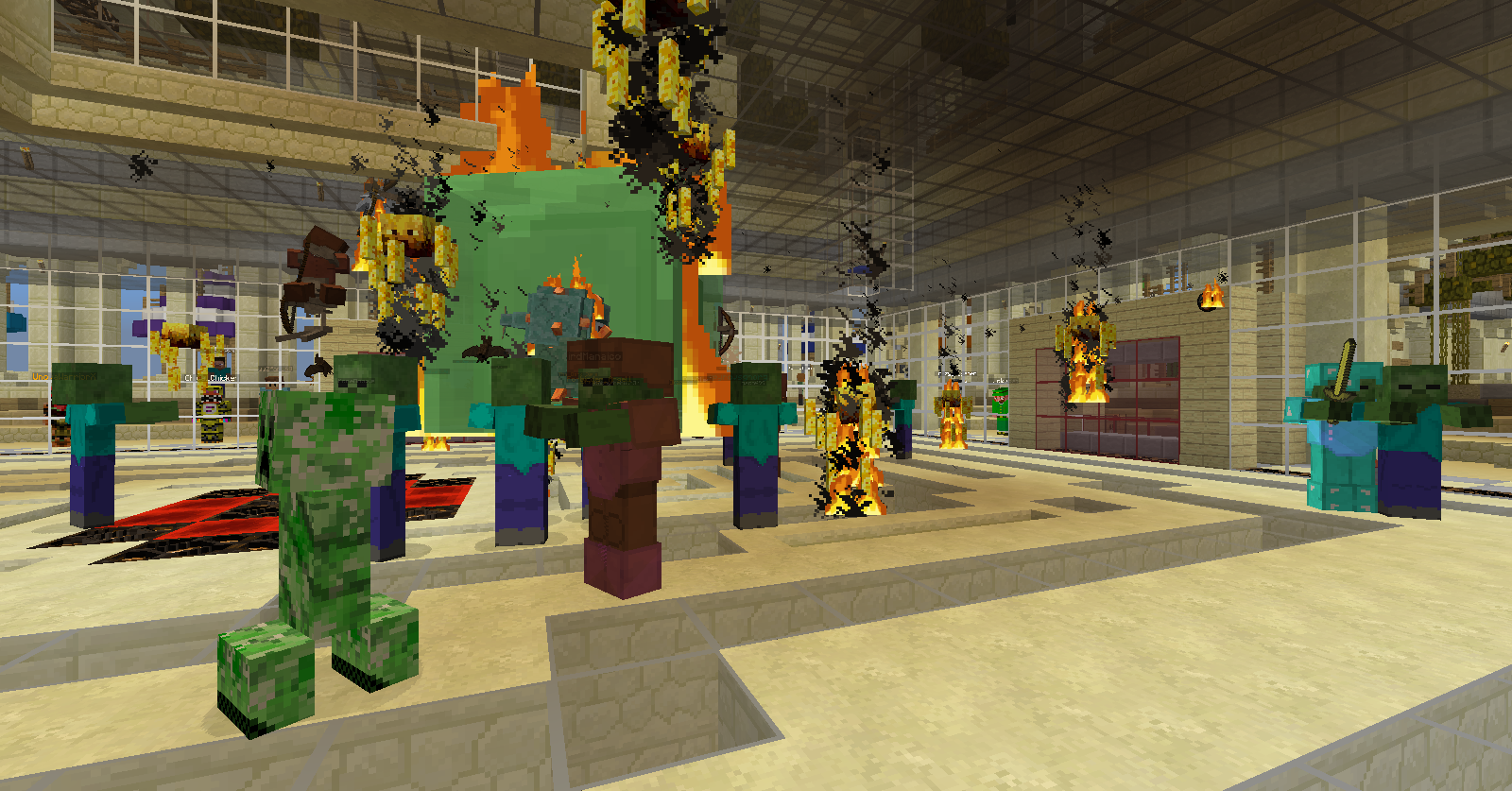 END_OF_DOCUMENT_TOKEN_TO_BE_REPLACED

Deck the halls, trim the stockings, and sing this Christmas song!

In December 2013, a member of Empire Minecraft by the name of _Stads_ had the novel idea to create a Christmas song and have all of the Empire Minecraft staff provide the voices. The staff didn’t have the best vocals, but they tried their best. Multiple recordings were sent in and combined over the course of a month to create a pretty neat song parody, just in time for Christmas. While the vocal track to the Christmas song no longer exists, we wanted to spotlight the lyrics for our Christmas Eve blog post as a throwback special to 2013.

So grab the nearest hairbrush, remote control, or other microphone substitute and sing this Christmas song at the top of your lungs. If you have an ear for music, maybe you could even make your own video using this song, or maybe try making your own Empire Minecraft Christmas song parody. If you do, comment below so we can see it!