Minecraft is without a doubt one of those games which has inspired thousands, if not millions of people, and that inspiration is shown all over the place. And I’m not only talking about all the awesome things which people managed to build within the game, many of which can also be admired on our own Empire Minecraft servers, but also about everything around it. In this particular case, we’re looking at Minecraft animation.

An often seen question on both Youtube (home of many awesome Minecraft videos) as well as the official Minecraft forums is: “How do they do that?“. So in this post I’ll be showing you some rough examples on how you can combine Minecraft with computer graphic imagery (CGI). Do note that I won’t be doing any actual animation because that would make this post way too complex. I’m merely going to show you guys some basic examples of how it can be set up with Minecraft scenery.

People have made pictures (and more) while using computers for nearly as long as computers exist. I even recall playing with a program called DR Halo on an old XT PC (we’re talking around 1980 here). As computers slowly became more powerful and versatile, so did the options of image creating and editing. At first the best one could do was simple editing: actually modifying the image (also called “bitmap”) itself.

Later we gained access to vector graphics. Now an image was built up from several smaller components called polygons. You can think of a polygon as a shape such as a square, circle or triangle. The main advantage is that a polygon doesn’t need to have a fixed size; that usually gets calculated by the editing software. This can make sure that a picture won’t get “blocky” if you zoom in; simply because the size of the components gets re-calculated every time.

And finally we get to the point where the use of vector graphics was further enhanced to a point where it allowed us to create virtual 3D objects. Where the next step is obviously a point where you could now create moving objects, a process called animation.

The first thing which we’ll need is a program which can actually set up (“model”) 3D environments and handle animation of different aspects in them.  As one can expect, there are dozens of different programs available. From free to use programs such as Blender, “Freemium” software such as Daz Studio right down to complete commercial packages like Poser. In case you’re not familiar with the ‘Freemium’ term: it basically means that the software itself is available free of charge, but in order to fully utilize it you’ll most likely end up buying some extra contents which you can use in your scenery.

My personal favorite, and the one which you’ll be seeing in the examples below, is Daz Studio.

Step 2: Getting Minecraft ‘into’ our 3D software

This is where things start to become interesting. First we’ll need a Minecraft environment (world save) which we’ll be using as a starting point. For my animation world example I’ve used a level in which I’ve been playing a hardcore game: 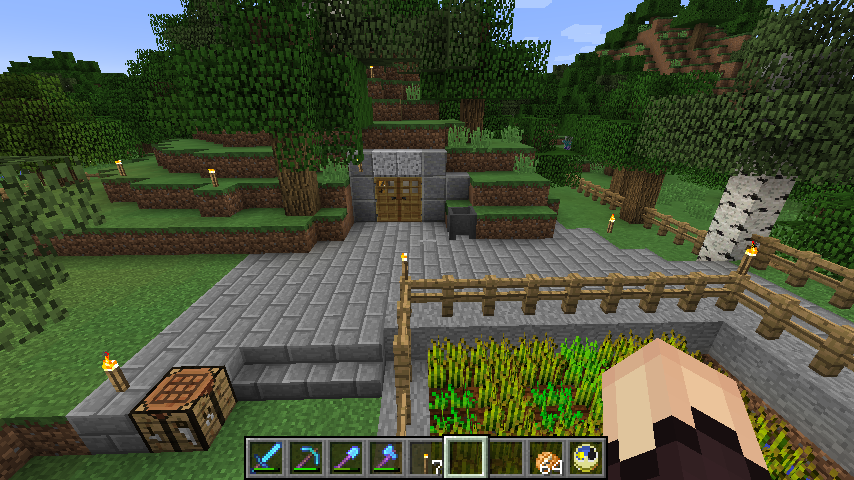 So now all we need to do is to somehow “convert” this Minecraft level into a 3D object which we’ll be able to use in our animation software. As one can expect there are plenty of programs available for that, and my personal favorite is jMc2Obj. It’s an open source program written in Java, so it’s usable on all common platforms, on which you can also play Minecraft. 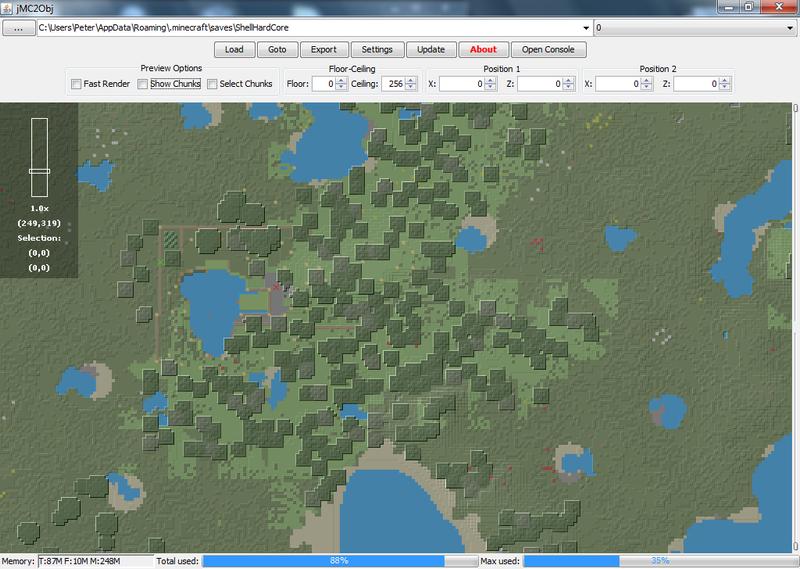 At the top it provides a pull down menu which contains all your single play levels. Simply select the one you need, click the load button, and it’ll be loaded and roughly rendered in no time. Next you’ll need to select the area which you want to export for your animation. jMc2Obj provides very flexible ways to customize your selection; you can simply drag a selection box, or you can choose to limit your selection to specific chunks (a chunk is an individual section of a Minecraft world consisting of a 16×16 block area). You can also customize the height; by default it’ll export the entire area all the way down to bedrock, but if you only need a surface area for your animation you could select that as well. 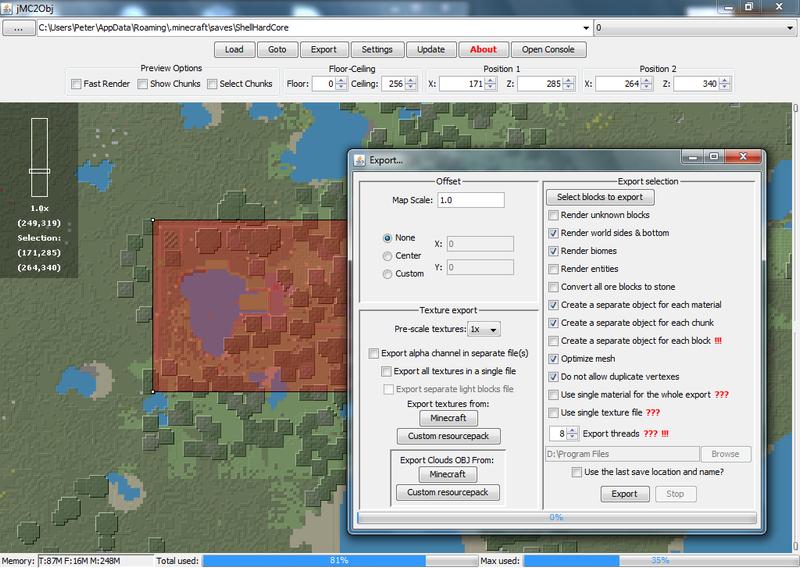 After you have made a selection, it’s time to click the export button. As you can see above I simply selected a specific area which contains the small base I built for this animation project. Exporting the area is actually a 2-step process: First you’ll instruct the program to export the area itself; all of the blocks it finds will be transformed into 3D objects and exported accordingly. But that’s not enough: a 3D object also needs a surface, a texture to be exact, in order to give it a more realistic look. Fortunately for us, jMc2Obj has this covered also. It can even use texture packs other than the Minecraft default. In my example, I simply told it to export the default textures from Minecraft by clicking on the Minecraft button in the left area of the export screen.

Now jMc2Obj will generate a Wavefront object file. This format has actually become an open standard which is supported by nearly all available 3D modeling and animation software on the market. In my example I’ll be importing the object into Daz Studio, and it’s really quite easy: all I need to do is to select the ‘Import’ function, point it to the OBJ file and soon I’ll be looking at my own Minecraft 3D object: 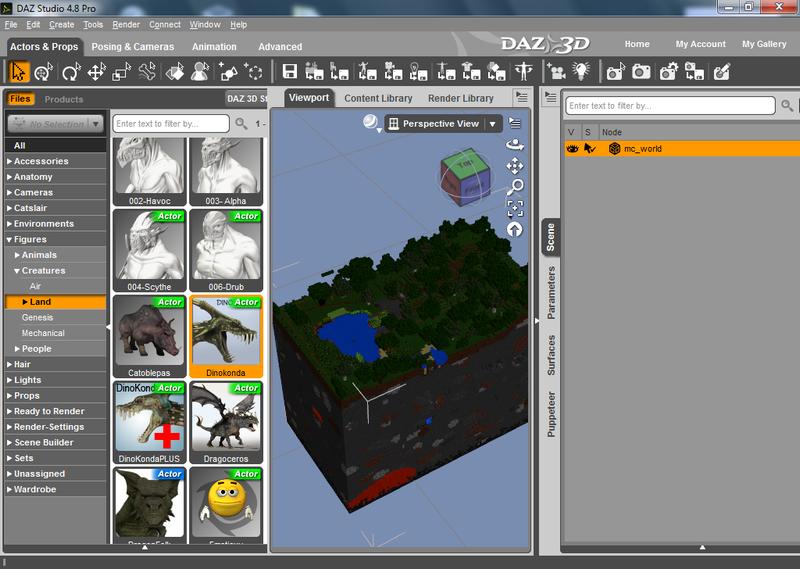 As you can see, I successfully transferred a complete “world section” going from the bedrock layer right down to the surface. So all that’s left to do now is to use this “Minecraft environment” to create a scene which we can use in an animation.

This is exactly how I created the scenery in this forum post. Surprise! It’s not a new monster or a texture pack; I merely added the monster which I selected above (the ‘Dinokonda’) and added it into the scene. Next I edited the pose a little bit (open / closed the mouth, moved the head and its tongue, etc.) and before you know I had an image of a weird and dangerous looking monster in Minecraft.

Now that we got our Minecraft environment all that’s left to do is to add extras for our animation use: 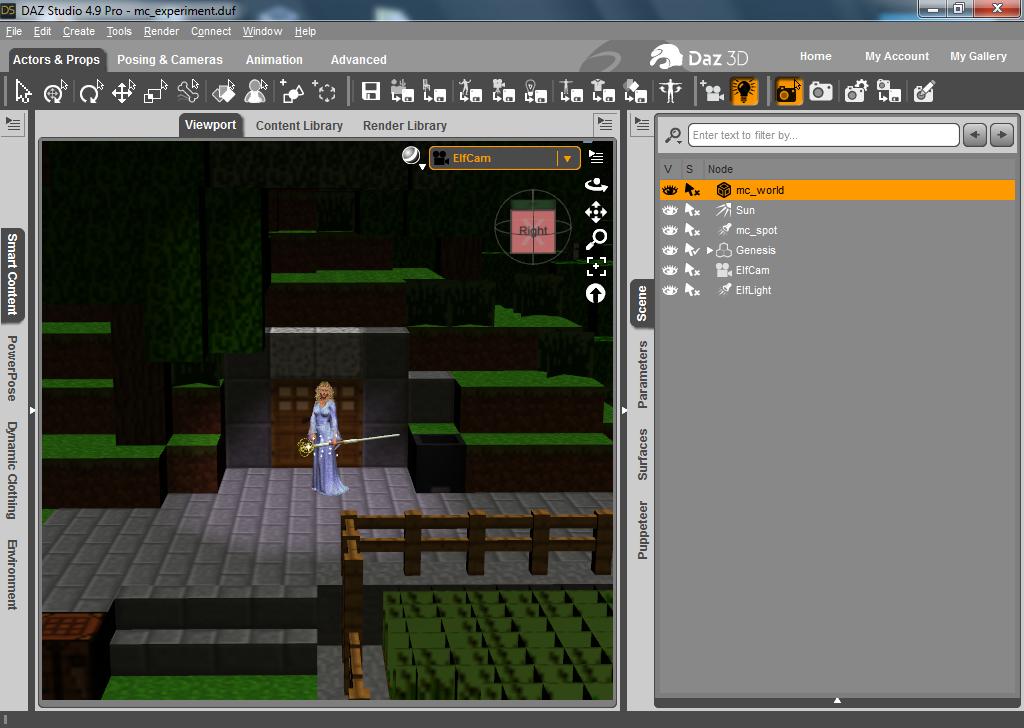 I added a female princess-like figure, gave her a magic staff, added some light effects to the scene,  and defined a specific position which will be used as a starting or viewing point (a so called “camera”). The result can be seen above.

Now that I have my scenery fully set up, I can start concentrating on actually adding some animation, resulting in a human figure who would be running around in a Minecraft environment.

As you can see it’s not that hard to set up a Minecraft scenery in a 3D animation program. And the best part is that the tools which you can use for this are sometimes available free of charge.

If you want to know more then I encourage you to follow the links which I’ve used in this article.