Food is one of Minecraft’s core components. A player couldn’t mine, build, or gather anything without it. Minecraft food can determine how quickly a player heals, and whether or not they can sprint. In order to survive, a player will want to gather as much food as they can, as fast as they can, in any new Minecraft world, and will want to create a steady supply of it. However, the question remains: which Minecraft food do you need, and what’s the best option for your chosen adventure? 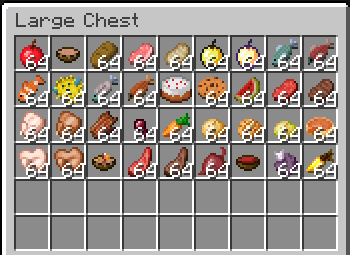 All the food in MC that gives hunger and saturation points.

Eating Minecraft food has effects on two main aspects in the game. Hunger, which impacts your player’s ability to be active, is represented by the drumstick bar on the top right of a player’s hot bar. If it’s not showing, try hitting F1 to make it visible again. The other factor is Saturation, an invisible statistic which determines how quickly the hunger bar depletes. When your saturation level reaches zero, your hunger begins to drop. Exhaustion is a third statistic that decides how much saturation is depleted, but that won’t become important until later.

Each food in Minecraft contains a hunger value and a saturation value. The hunger value is how many points (or how many half-drumsticks) that food will restore, while the saturation value identifies how long that food will keep you fed. Note that the amount of saturation points cannot exceed the amount of hunger points a player has. Using a list (found here), I’m going to be talking about the best Minecraft foods in terms of these values, and their usage!

For our purpose of analyzing Minecraft food in different situations, each can be divided into three broad categories. Gathering, which is the collecting of resources to use; building; and fighting, whether it be Player vs. Player or Player vs. Environment.

Gathering materials, whether from the Overworld, End, or Nether, is essential to Minecraft. Depending on the kind of gathering you’re doing however, it’s better to use certain foods compared to others. For gathering food in the Nether, you may opt for very filling food due to the heightened risk of heavy damage (such as lava or those wretched ghasts). In the End, you may opt for high saturation foods since you will be likely traveling large distances, and don’t want to stop to eat so often. For the Overworld, you might need any variation, depending on whether you’re mining or gathering something else.

Mining is not a very energy-consuming activity. Exhaustion, the statistic mentioned before, is the reason for this. When you’re mining, you’re generally only breaking blocks, with the occasional fight with monsters. Breaking a block costs hardly any exhaustion points. Exhaustion works by taking all the energy-consuming actions a player does and adding them up until it reaches a specific number, and after it reaches that number, it then begins to lower a player’s saturation level. Remember: a player’s hunger begins to drop once saturation reaches zero. Since breaking a block costs very, very little exhaustion, the food bar depletes very slowly. 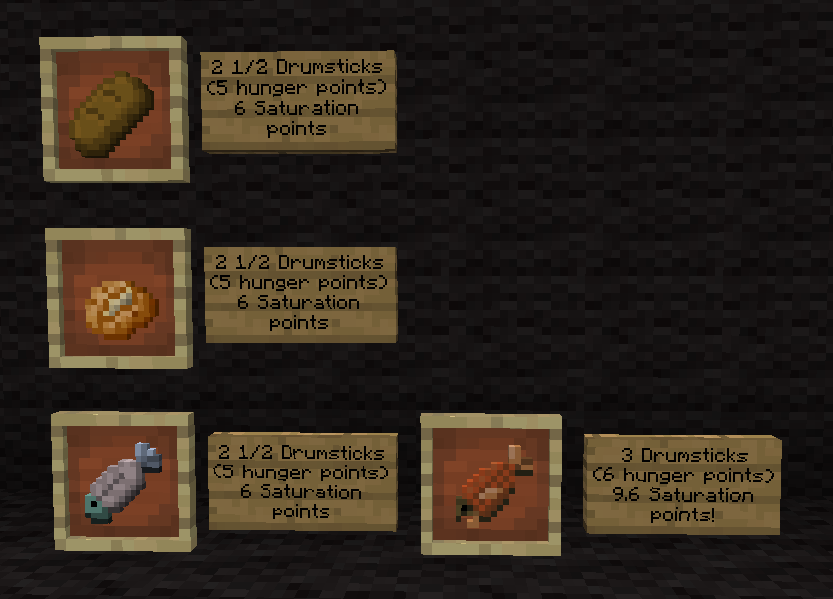 The values of bread, baked potatoes, and cooked fish

Therefore, the best food while mining is one that is high in saturation, but with a low hunger value. This way you stay full for much longer, and hardly have to eat. The best foods for mining are bread, baked potatoes, and any cooked fish. Bread restores a fair amount of hunger, at two and a half drumsticks, while giving a good amount of saturation. Baked potatoes are very similar, and any cooked fish will give more saturation.

Since it requires wheat to be farmed, bread is arguably harder to gather, unless you set up a farm dedicated to the mass production of it. Crafting bread also consumes more items than it makes (since it takes three wheat to make one bread). Potatoes are easily farmed and cooked, making baked potatoes more efficient to farm. Cooked fish are more time consuming to gather, though if a player has a guardian farm it may not be time-consuming at all.

Yes, but… What is the best?

Since they are so easily made and the Fortune enchantment works on the crop, I generally use baked potatoes above the other options. It’s easy to make stacks upon stacks of baked potatoes and store them until they’re needed. Usually while mining, I rarely will use more than half a stack of baked potatoes per trip. This, coupled with their saturation and hunger values, is why baked potatoes are best for mining. 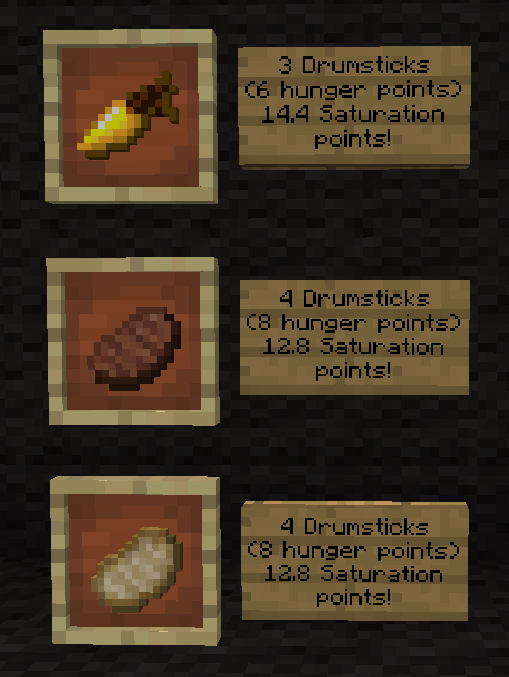 While gathering shiny rocks underground may be safe and take little energy, working on the surface, or in the End, or Nether worlds is an entirely different story. It’s unpredictable what you may have to face in any of them. You may have to fight monsters, break many blocks, or you may end up building. Who knows! Because of this uncertainty, it’s always good to have a highly saturating, highly filling food on hand. With these values in consideration, the most ideal foods include steak, cooked pork chops, and golden carrots.

No matter what you may be doing, steak and cooked pork chops are very reliable. Plus, if you use the Fire Aspect enchantment, they come pre-cooked, which can save some hassle. The easiest to obtain of the two are the cooked pork chops. It is less time-consuming to get loads of carrots to use for breeding than it is wheat, and therefore a player can get more pork chops than they can steak. It’s slightly faster too!

Golden carrots, on the other hand, are a pricey Minecraft food item. The cost of eight gold nuggets per carrot makes many players think that it’s a bad item to choose. In my experience, using golden carrots is actually quite rewarding! If you can get through the struggle of creating (or perhaps you already have?) a gold farm, the gold part of the deal becomes no real issue at all (it’s also pretty easy to stand on a pillar in the Nether and snipe zombie pigmen for their gold nuggets). 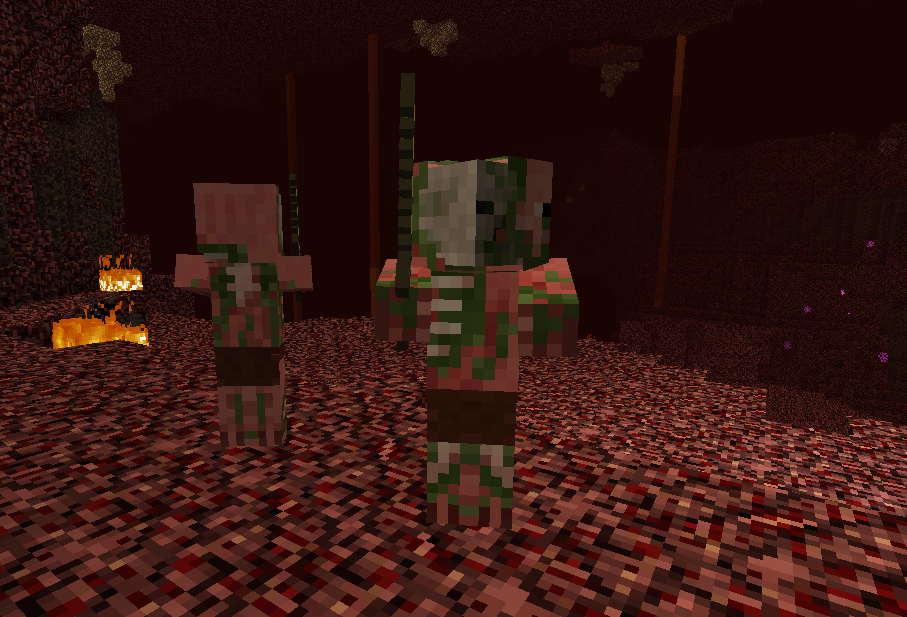 Zombie pigmen mobs, which can be killed for golden nuggets to make golden carrots.

Furthermore, golden carrots give the highest saturation in the game, and a fair amount of hunger points. With a whopping 14.4 saturation and restoration of 3 drumsticks, they’re certain to last a long time. A single stack of golden carrots could probably feed a player sufficiently, no matter what world or Y-level! During my trips where I’ve experimented with golden carrots, I’ve found them to be extremely reliable once the hurdle of gathering gold is crossed.

Building, much like mining, is actually not a very tiring activity. (Though if you’re building a large or complex building, this may not be the case! Especially if you keep falling and have to jump back up a lot.) For this, you’ll again want high-saturating foods, that aren’t necessarily very filling. Once again, the baked potato takes my pick for this. 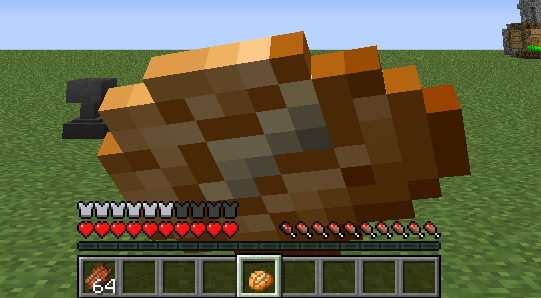 In stark contrast to everything else, fighting is where food matters most in my opinion. Food can decide how quickly a player heals, and whether or not they can sprint, both of which are extremely important in any kind of fight! In both PVP and PVE, players need to be able to regenerate health fast and always be able to run.

If, for whatever reason, all those foods aren’t obtainable, steak and cooked pork chops are again very good choices. It’s undeniable that they are better suited for PVE though. When fighting hordes of mobs, these foods will keep a player full and able to run, which is just ideal for an easier battle against the environment rather than versus other players. Even though I usually use the baked potato, I will admit that they are poor at quickly regenerating a player’s health. When you have hordes of zombies coming after you, not having to run around for your entire sprint cycle in order to regenerate health is going to make a big difference.

Which Minecraft Food Do You Use?

As I’ve said multiple times throughout, I prefer baked potatoes simply because of how easy it can be to amass them. I won’t deny that they aren’t the best food to carry around, though, since they don’t provide enough saturation to keep a player healing if they take lots of damage.

When it comes to food in Minecraft, what’s your preferred meal? Do you like the fishy taste and decent saturation of salmon? Maybe you prefer to carry around cake and get a sugar rush with every bite! Whatever tasty morsels you find the most useful in your Minecraft ventures, I’d love to hear about them.