Sandbox games offer players the tools and let them create their own fun. Each player can create their own entertainment using the tools provided however they see fit. When people see Minecraft, some create complex redstone creations, some recreate scale models of cities, and others find their enjoyment through more modest means. Sometimes though, it can feel like you have run out of Minecraft challenges and that all of the tools have been exhausted. In times like this, it is best to use a little creativity and make some new, fairly useless but fun, Minecraft challenges. With this in mind, let’s take a look at some ways to keep Minecraft challenging and fun. 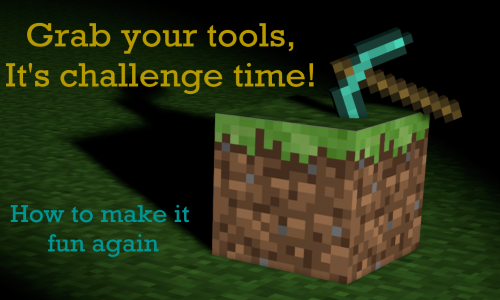 Set up a relatively large pen and put a pressure plate in it. Put a cow in their also. Link the pressure plate to your form of punishment. Possibilities include command blocks that summon bosses, instantly kill you, clear your inventory, and/or spawn more animals in the pen. The idea is to create a random punishment generator that is constantly going while you do your daily things. Bonus points for putting multiple pressure plates and punishments.

The one rule of mining

Only dig straight down or straight up. Even if you don’t find some neat lava while you dig, you will have a pretty hard time getting out if you do it wrong.

Never destroy a block. Live your life as a wanderer who does nothing but enjoy the natural beauty of a fake world. For being such a great person and leaving the naturally generated terrain as it was meant to be, set up a random punishment generator to make your nomad life into torture.

Never place a block (except crafting benches and furnaces). This will be a good time to create the greatest hollowed mountain ever. The only problem is if you break the wrong block, it stays like that forever.

Never kill a mob. Follow your pacifist ways and live off of carrots and wheat while hugging zombies and sharing your home with creepers. This also includes not using other mobs, such as wolves, to do the violence for you.

Play the game without ever turning. You can even remap the mouse clicks to keys so you don’t touch the mouse at all. In order to make it possible to mine, tilt yourself a small amount down before remapping everything.

Use your preferred way of random number generating and remap the controls to random keys. Preferably have someone else do it so you have to figure it out on the fly. How numbers are assigned is up to you.

Use a command block to always give you a certain effect. Use effects such as nausea and blindness for the most challenge. Poison is also a good one if you want a super Minecraft challenge.

If you play on Empire Minecraft, try setting your difficulty to level 10. Things get super insane.

That’s all of the Minecraft challenges for now