“The ground shakes nearby…”

“You sense an eerie presence…”

If you frequently visit the wastelands or wilderness on Empire Minecraft, odds are you have received the message that you have spawned a miniboss. The question is, what do you do after? This post will highlight helpful tips to gear up and take down the beastly creatures.

Possessing the proper equipment makes a battle a much easier task. When gearing up for a miniboss fight, the following tools are recommended

Once all the items are gathered, your inventory should look like this: 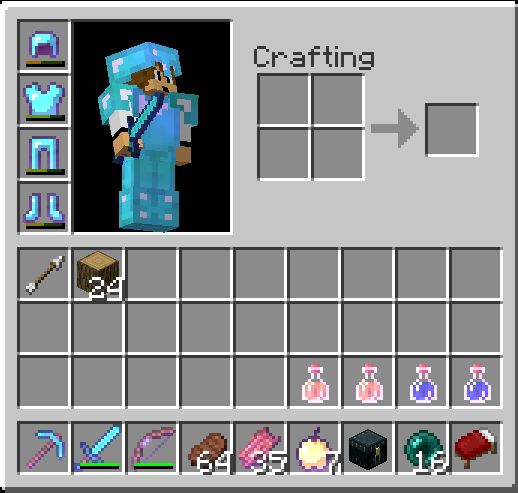 Even if your intention to venture into the wild isn’t to fight a miniboss, carry these items with you because miniboss spawns are random and can happen at anytime.

Now that you are prepared, its time to fight the miniboss. This part of the post will be divided into different sections.

A sword is the preferred weapon for this miniboss. If you can, get the Momentus to a body of water. This will extinguish his guardians and give you and slow the miniboss down. If you can get him to water, use  the water breathing potions you packed. If you cannot get him to water, then use fire resistance potions and enderpearl away from him when needed. It is easier to kill the guardians as they spawn as they are much stronger when in large packs. Eat shiny flesh or golden apples frequently during the fight to maximize healing effects.

A bow is the preferred weapon for this miniboss. Marlix is much easier to fight over land. Drink a fire resistance potion before the fight and drink more as needed. If you are forced to fight the boss over water, then use the wood you brought to craft a boat so that you can keep up with the miniboss. If Marlix gets away from you, use the enderpearls to catch up to him. It will be very hard to kill him while he is surrounded by his enraged friends, so pick them off before engaging in combat. If you have the chance, give Marlix a few blows with a sword. The sword does more damage than a bow to him, but it is very hard to get a good swing in.

Generic Tips for Fighting a Miniboss :

Following these tips will result in a much easier battle, yielding better rewards. Good luck taking down a miniboss!