Behold the unfortunate tale of Mouthless the Wanderer and his crippling fear of spiders, featuring Jeff the Sheep.

“Please, no spiders. No spiders…”

Mouthless’s eyes widened as he peered at the gaping cave entrance, eager to get inside and start mining away. If he could just sneak around the entrance and find some iron, gold then he’d be able to keep his shop in town stocked and he’d get rich without facing any of the wretched spiders known to surface around these parts. Empire Minecraft’s own hard-working, spelunking, mega-mall owner, Mouthless thought, and he imagined whatever a smirk would feel like paving its away across his face. I like the sound of that.

“Baa baaa’a a baaa ba baaaaa?” Jeff the Sheep said, prodding Mouthless to get a move on with a tap of his knee by his hoof.

As Mouthless turned to face Jeff, the invisible smirk ceased to exist in Mouthless’s mind. “I’m afraid of spiders”, he muttered. 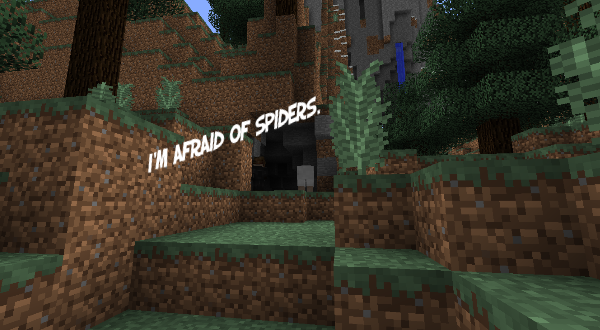 Jeff stood there for a moment with a blank expression closing in on his face. Afraid of spiders. He let the words swim around in his mind for a moment, unable to believe his ears – Mouthless, survivor of his Christmas TNT attack, slayer of creepers, friend of the zombies and self-proclaimed ‘King of Minecraft’, was afraid of spiders.

That’s no way to run a mutually-beneficial store, Jeff thought and as Mouthless’s receptionist, he had to act fast.

“Okay”, Mouthless panted as he edged closer to the cave, sweat trickling down his forehead. “I’ll go in… I’ll count down to zero, and I’ll walk thro-“. 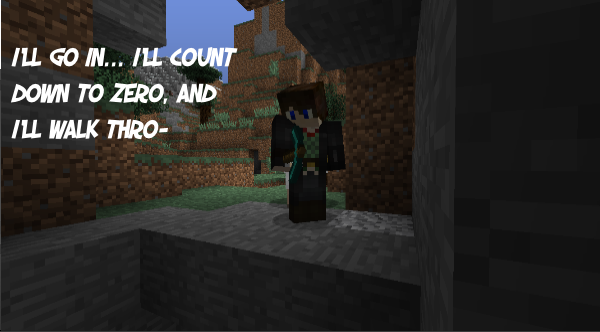 He couldn’t finish his sentence before the worthless blocky sheep accompanying him stood on his two legs and pushed Mouthless into the cavern entrance. Mouthless discovered two things: the cave entrance was actually just an entrance to a concealed ledge, and that he was afraid of falling, too. He hit the floor with a thud. 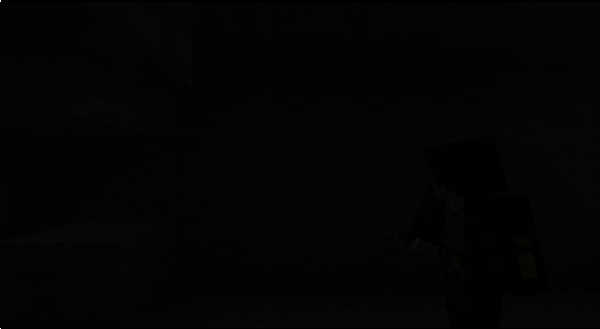 On the surface, Jeff felt pretty pleased with his quick thinking, and so he treated himself to an all you can eat buffet with the nearby grass. 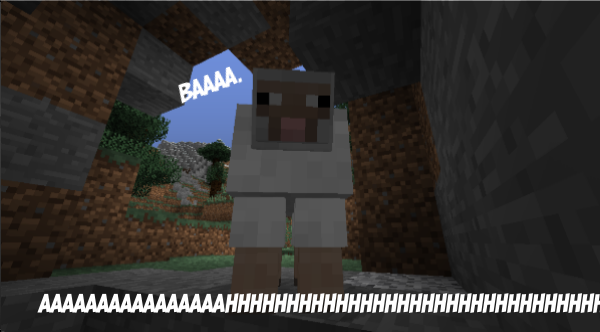 Several hours had passed, and Mouthless had been exploring the cavern without a single encounter with any of the very aggressive mobs which littered the sprawling undergrounds. Most importantly, no spiders had been in sight. He had sweet-talked his way out of being ransacked by the Green Raiders, mainly because they were two or three zombies who had literally half a brain and could be reasoned with extremely easily – he’d even managed to trick them into giving him their stuff. It wasn’t much, but it would sell in town for a few rupees, he was sure of it. Maybe Jeff did me a favor, he thought to himself. Thanks to him, I can get all the rupees I need for myself. He placed a torch.

“Why, hello there”, a tiny voice slithered. Mouthless looked down. 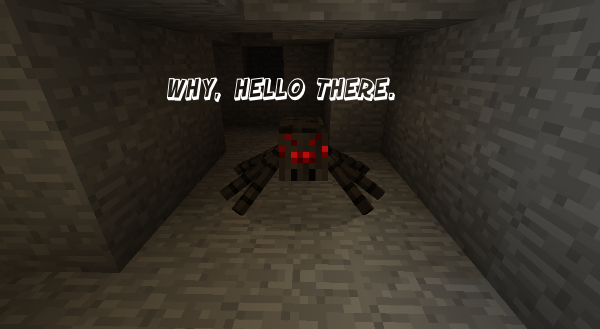 “WHAT CRUELTIES HAVE I DONE TO DESERVE THIS?”. Mouthless turned and ran, moving his rectangular legs faster than he had ever before in his life. 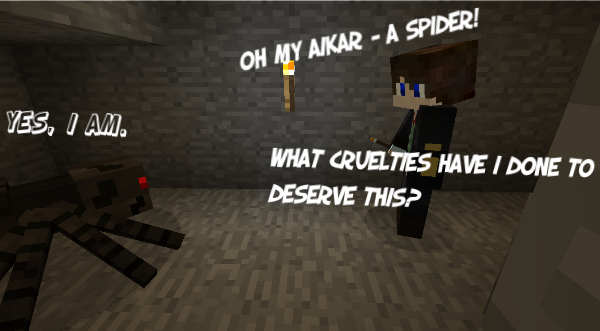 Mouthless didn’t know how long he’d be running for, only that it had been a long time and his legs ached.

“My friend, is that you?”, he heard a little voice call after him. 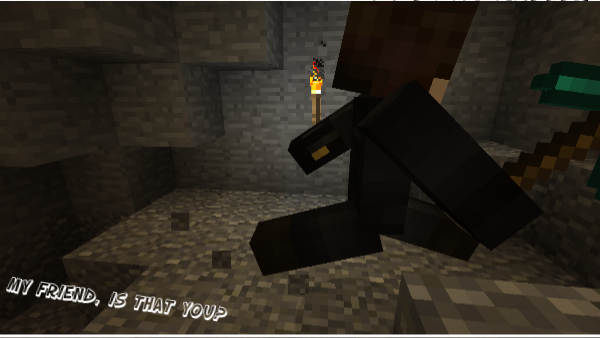 “NO!”, he exclaimed, immediately regretting his decision to speak. 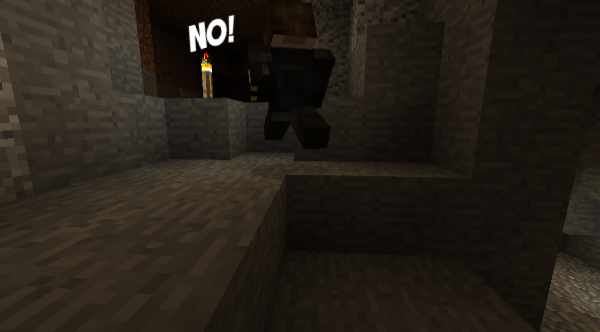 He was now at the site of the beginning of his journey of ‘spelunky-ness’. His hands shaking, he did an inventory check. Okay’, he thought, that’s all of it. He got his pickaxe out. No sticks, so I can’t make a ladder. This’ll have to do. 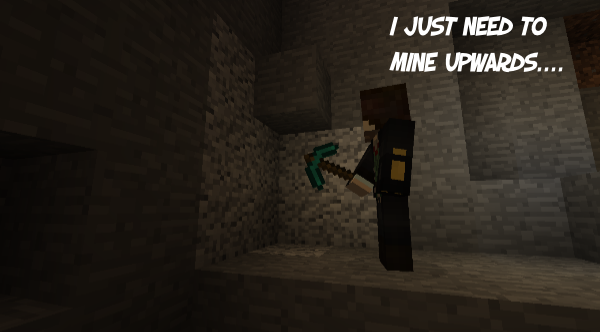 He hit the stone block, a ‘ka-chunk’ echoing through the tunnel.

Mouthless screamed, and stared fearfully into the tunnel, mining the block faster and faster. He whimpered, tears streaming down his face. Manly thoughts – he let the words fill his mind. Manly. Thoughts. It was no use.

He heard the little ‘chunk’ sound of confirmation that the block was mined. He looked away from the tunnel for a half second to confirm the spider had not reached him.

“Oh my goodne-“, Mouthless tried to say. The lava pouring from the wall disintegrated him and all of his items, leaving him with only the taunting image of his demise through the re-spawn screen. He exited to the main menu. Hopefully when he logged back into Empire Minecraft, Jeff would have mined some new surface goodies for them to sell. 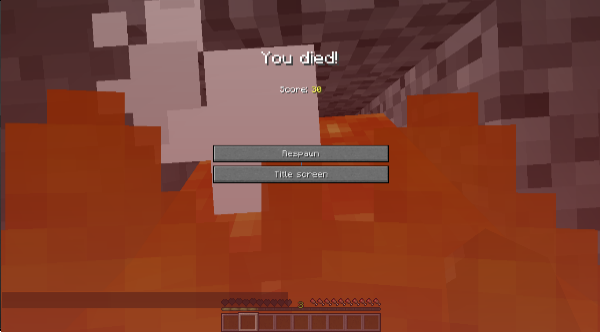 Meanwhile, Jeff felt sick to his stomach and finally, after eating a mountain’s worth of grass, fell into a slumber among the pine trees just outside the cave Mouthless had entered hours before.

He awoke to the alarming sound of something burning in lava, but he soon thought nothing of it and went back to sleep, dreaming of the riches Mouthless would bring back and all the rupees he could steal from him.