Do you like building? Getting bored of what minecraft supplies you to make your creations? Well, look forward to the 1.8 update which adds many great blocks that you can use to add detail to some of your builds. These new blocks will brighten up your builds and add small details that will catch the eye to make your build look amazing!

First a good thing to mention about something we’ve been waiting for ages for would be the addition of the ability to craft chiseled stone brick(circle stone), mossy stone bricks and cracked stone brick. These sought after blocks were previously only available in generated structures, now with the easy accessibility of them they are now more survival friendly building blocks.

Besides it’s technical uses the next block I will be covering can add a splash of color and can be used to hide lighting, the slime block. The slime block is not only going to be a great tool in redstone contraptions but will be seen in buildings. The slime block has a great shade of green that wasn’t previously in the game, and with it’s speckled pattern you’ll be seeing more detail in your build. Slime blocks look good with stone brick and the other stone variants as well as a  way to hide light sources as a slime block is transparent.

A few controversial blocks that will spark up your caving experience are the new igneous rocks that were added. These blocks are diorite, andesite, and granite. Each of these blocks can be found in the wild similar to stone, but can also be crafted. Diorite, andesite and granite all have craftable polished forms as well. Diorite is the white variant of the block with black and grey spots giving it a rough texture. Diorite will be a nice focus block in 1.8, but won’t look great if overused. Granite has a red-brown texture with a similar pattern to cobblestone. Granite is the only one of the three that jumps out at you with it’s color. Andesite which seems to be the fan favorite of the new stone, has the smoothest texture and is a lovely shade of grey. Andesite will go well with regular stone, and will look good in roads. Each polished variant of the new stones look cleaner and well-formed, and can be used with their unpolished forms to possibly show decay or breakdown of the stone if you are building an older building.

With the addition of 1.8 we also get a few new mobs! The guardian being one of them will only spawn in ocean monuments, a building under the ocean made up of our next new block. Prismarine is a green block that looks like cobblestone, but with color and a bit more detail. Currently the only way to obtain this block will be to either farm guardians and craft it with the prismarine shards they drop or to destroy an ocean monument and take it all! Prismarine bricks are also added, similar to stone bricks they have little texture on them besides a few lines. Prismarine bricks have a smooth texture compared to prismarine, but can’t be crafted from prismarine blocks. Prismarine bricks can be crafted with 9 prismarine shards. The third variant of prismarine is dark prismarine that has a brick-like texture and has a shade of dark green. Sea lanterns, although they aren’t a prismarine variant spawn in the same ocean monument. Many players wish for more light sources in minecraft and looks like we finally got one. Sea lanterns will be a good way to light up your build as they don’t have a distracting texture like glowstone so you won’t have to hide it. Sea lanterns are white with a cyan border that wraps around every side of the block. All four of these blocks will primarily be used together, but they also look good with diorite, stone and netherbrick. The best way to use your prismarine blocks in building would be to use other blocks with texture as the prismarine blocks have a lot of texture and need to be offset by something else. Although it may not look great in building, sponge is now obtainable through survival in these underwater temples.

There are a few other blocks I can touch up on like coarse dirt and iron trapdoors but they aren’t as interesting as the other blocks. The last block I’ll be covering that was recently added will give your builds a bit of personal flair with the ability to customize them to your liking. Banners or flags have millions of combinations and will be a great way to add some personality into your builds, or even make your own insignia and plaster it all over your builds!

Get to building with all these new blocks! 😉 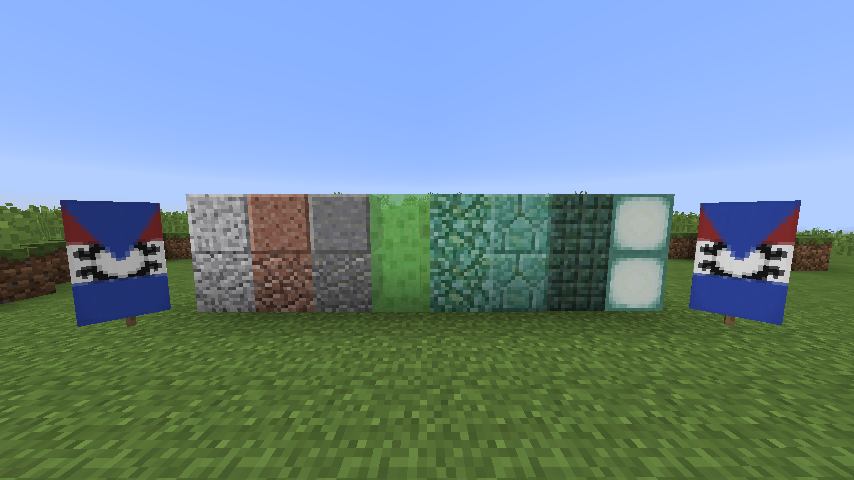